Skip to content
Nearing the last set of recommendations for the year. In the next couple of weeks, I will talk a bit about the year, and what I would like to do with this blog in the next few months. For now, though, here’s some more stuff to read and look at.
List: Longreads Best of 2012
http://blog.longreads.com/tagged/best-of-2012
I have to begin with this, because I discovered three of the five items below here. Various Longreads.com users list the favorite longer pieces of the past year. Lots of smart, interesting people recommending interesting things to read— that should be enough to get you to follow that link.
Article: “Guns ‘R Us” by Jeanne Marie Laskas
http://www.gq.com/news-politics/big-issues/201209/gun-shopping-gq-september-2012?currentPage=all
Thoughtful, smart piece about guns and gun ownership, not new but made even more timely by the no-word-is-adequate events in Newtown, Connecticut. The author goes to a large gun store in Yuma, AZ, where she not only buys guns but works behind the counter for a short time, in order to understand the world of gun ownership— and what really comes through in the piece is the extent to which it is a world, one quite distinct from the experience of people who don’t own and don’t like guns. It seems to me, after reading this, that, while guns and gun laws might be a problem (I think they are), the bigger problem is that we have two groups of people who don’t just vehemently disagree, but do not understand each other at all. Both, it seems clear, are actually concerned about personal safety, but one side thinks this is impossible with guns, the other that it is impossible without them. Another striking thing is the attitude toward government that emerges from the people Laskas talks to: they are not, as the stereotype would have it, primarily worried about their own government (or not nearly as much, it would seem, as they are about invasion by China or some other foreign power); it’s more that to rely on the government for your safety is, in itself, wrong— whether or not the government is capable of delivering (which they pretty clearly think it is not).
As a similarly intelligent (sort of) counter point, which deals much more with the policy angle on all of this, I recommend (over and over again) Jill Lepore’s piece from the New Yorker on Trayvon Martin.
Article: “Google’s Lost Social Network” by Rob Fishman
http://www.buzzfeed.com/robf4/googles-lost-social-network
Apparently, there are a lot of people who were really into Google Reader, before it was semi-absorbed into Google+. I was not aware of this; I have always used Google Reader indirectly, as a way of synching RSS feeds that I read in a separate client application. But, it seems that Google more or less accidentally created a pretty successful social network, more or less by accident, and then killed it by…trying to create a social network. What emerged most clearly for me in reading this is how difficult it actually is to predict how people will use things, and how easy it is for the size of large organizations to overwhelm their attempts to move smoothly in any one direction.
Article/Slideshow: “The Sublime Sci-Fi Buildings That Communism Built” by Anthony Paletta
http://www.theawl.com/2012/12/the-sublime-sci-fi-buildings-that-communism-built
Also: http://www.cracktwo.com/2011/04/25-abandoned-soviet-monuments-that-look.html
If there was one thing communist states were good at, it was thinking big— and marshaling resources in order to make big things happen (often at the expense of “little” things, like, say, feeding the people). That was as true for architecture as for anything else, as these images show. Many of them— in particular these Yugoslavian war monuments— 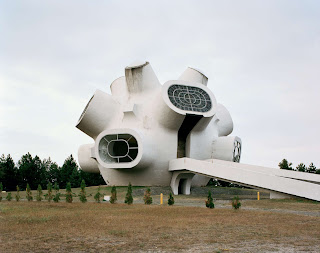 look like stage sets from a 70s sci-fi movie (not necessarily one of the happy ones). These aren’t really outside the development of 20th-century architecture, but they are definitely from a weird branch of the family that nobody wants to invite over for Thanksgiving.
Article: “Two Hundred Years of Surgery” by Atul Gawande
http://www.nejm.org/doi/full/10.1056/NEJMra1202392
This is another older piece I just discovered through Longreads. Atul Gawande gives a brief overview of the history of surgery as it went from a last-resort Hail-Mary to a central part of medical practice. The two hinge points, unsurprisingly, are anesthesia and disinfection, but he also notes that the last 25 years or so have led to major breakthroughs reducing the invasiveness of procedures. Among other things, we learn that the surgeon Robert Liston, operating in the pre-anesthesia days, could amputate a leg in 25 seconds, which is equally impressive and disturbing.
Article: “Resident Visitor: Laurie Spiegel’s Machine Music” by Simon Reynolds
http://pitchfork.com/features/articles/9002-laurie-spiegel/
Nice long biographical sketch/interview with electronic music innovator Laurie Spiegel, who has gotten some press as some of her work from the 70s is reissued. Among other things, one of her recordings was included on both of the Voyager space probes. One thing the piece remind you of is the fact that early electronic music pioneers, in particular, were technological innovators as well as musical ones (and sometimes more the former than the latter). As much as the exploration of their strictly musical ideas, these people were simultaneously figuring out how to make and control sounds with computers and other electronic equipment. Stockhausen recorded pieces with instruments involving circuit boards soldered on to hunks of wood; Xenakis wrote software to interpret gestures in sound; and Spiegel had a sort of internship at Bell Labs, where she became involved in some of the most advanced computer research. She also, as Reynolds is keen to point out, anticipated a number of big technological changes, including our current era of “information overload” and the consequent difficulty of combing through all the music now available to us.