Once again, a Friday full of appointments means these are going up later in the day. But, hey, you probably weren’t going to look at them until the day was over anyway.

Though the new version of Sim City had some issues as a result of Electronic Arts’ DRM strategy, the game itself has been well received by those who managed to play it, and it adds new levels of complexity to the simulation. Fast Company invited teams of urban planners, architects, and thinkers about cities to compete to build the ideal Sim City; participants included Studio Gang architects and MIT’s Department of Urban Study and Planning. The big lesson is that, as with real policymakers, the most tangible rewards for the players came when they thought short-term—e.g., draining fossil fuels for an infusion of cash— rather than for long-term sustainability and continued growth. I’m not quite willing to say that this experiment reveals anything fundamental or unavoidable about planning and running cities, but it’s at least interesting that people with a lot of expertise and big ideas were unable to avoid the same pitfalls that so many real cities have run into.

Article: “In the Time of Cholera” by Jonathan Katz”

I will soon be leading a delegation of college students to the National Model United Nations conference, so I am thinking a lot about the UN, what it does well, and where it might do better. To say that this story is an example of how they “might do better” would be a grotesque understatement. UN peacekeepers from Nepal apparently carried an epidemic of cholera with them to Haiti, and spread it to the local population by dumping their sewage into a river. Over 7000 people have died as a result, and the UN is essentially refusing to accept any responsibility. Obviously this is a story of institutional failure, but it’s also a story about poverty and perverse incentives: part of the reason Nepal sent troops infected with cholera was because they rely on UN peacekeeping payments for a significant part of the national defense budget, and so they have little incentive to be too picky about the health of the troops they supply to UN missions.

Diana Lange takes ordinary photographs of people, and then manipulates them with a programming language/environment called Processing. Some of them end up quite abstract, the faces rendered in a few, flat polygons; others look much more naturalistic, resembling delicate pencil drawings until you look close.

South African photographer Dillon Marsh’s series of images of weaver bird nests constructed on telephone and power poles. It is remarkable how completely the birds have taken over these human constructions, and how eerie the result is— especially against the flat South African landscape, in which these are the only objects of any height to be seen. These pictures reminded me of the images of trees cocooned by spiders in Pakistan after the floods there; if nothing else, they are a reminder of the durability and adaptability of the natural world. 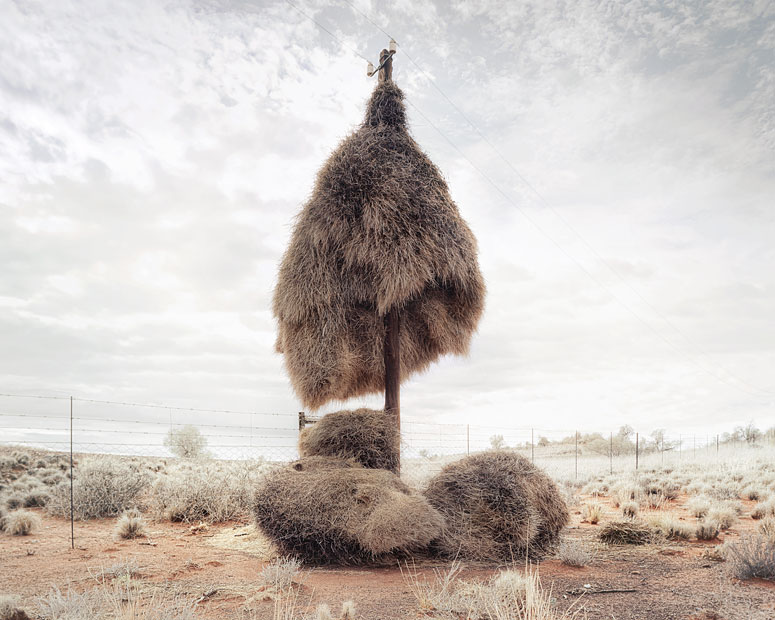