I’m trying to start the year off right, by being on schedule. I also thought it would be good to kick things off with some new music:

This song shares a lot of sonic DNA with Banks’s “Waiting Game,” which was pretty much my favorite song of 2013, so I was bound to like it. It doesn’t have quite the same dark edge to it, but it still recognizes the value added by a strong low end to even the most straightforward pop song. The group is from New Zealand, so a mention of Lorde is pretty much compulsory, even though they don’t sound much like her. Maybe, though, her success is leading to more attention and new discoveries from that far-away corner of the planet.

This is not quite new, I guess; it was a bonus track on the deluxe version of the Run the Jewels album, and it showcases everything that was great about that record: tight, intricate lyrics from both rappers, and the hardest, heaviest production going. Plus, it has Q-Bert scratching, which is a sound I’ve been missing in hip-hop generally.

Everyone’s talking about this genealogy of Netflix tags, and for good reason. It’s a different way to think about what exactly Netflix’s business is: not just the delivery of “content” to customers in as streamlined a way as possible (which they’ve got pretty much down, in my opinion), but connecting people to things they want to watch so that they continue to value the service (a perhaps harder task, and certainly one where they have some room for improvement). They’ve taken different approaches to achieving that goal, and the latest is an interesting mix of algorithm and human insight. If you read the (much shorter) NPR version of this, you should still take a look at this one, which is much more in-depth and also includes a genre-name generator at the top, built sing actual Netflix tags and combining them according to the in-house syntax that Madrigal and his colleagues figured out. The generator, by itself, is worth a click.

Article: “The Search for a Natural Sugar Substitute” by Daniel Engber

I like Coke. I have always hated Diet Coke, and Nutrasweet in general. When Coke Zero was introduced, I tried it and found it more palatable, but still nothing like the real deal (and it seems to give me headaches, which I know is an issue of some controversy). My “solution” (a word I used advisedly, since this is not really all that much of a problem) has been to go back to real Coke but drink a lot less of it— which is decidedly not what the Coca-Cola Company wants me to do. This piece describes the quest for an alternative to sugar that sweetens as effectively, has no weird aftertastes, and will be considered “natural” by consumers. Getting all of those characteristics lined up has thus far proved elusive; stevia and its derivates seem to hold the most promise, but are still far from perfect. The most interesting thing for me, though, is the question of how and when we consider something to be “natural.” I could rant about this for a while, but the short version is that I think the words “nature” and “natural” always represent entirely arbitrary distinctions or divisions, and will therefore never be anything more, in this context, than a more or less successful marketing ploy. The problem for soft-drink makers, then, is not so much to create something that is “really” natural as to correctly anticipate the public reception of different substances and processes, which is much different and probably insoluble.

This is an intriguing but too-short post on the differences between “real” cameras and phones. Mod argues that the “networked” quality of phones and similar devices, which allows images to be shared immediately and embedded with all kinds of contextual data about place, time, other participants, etc. gives those images a different, if not actually superior, value. Mod suggests that, as the quality of images from these kinds of devices improves beyond a certain threshold, the argument for carrying a DSLR in order to achieve acceptable image quality becomes less and less convincing, while the argument for taking advantage of the special qualities of “networked lenses” becomes more so. I think we still have to think about different kinds of applications and situations (which is why I want this to be longer), but I also think that for a lot of people, a lot of the time, he is probably right.

Video: “Li Hongbo: Out of Paper”

This guy makes amazing sculptures out of paper folded like an accordion and stacked/layered into various shapes. That description in no way does his work justice.

Image: “We Are Lucky When We Stay Up All Night” by Exploding Dog

Exploding Dog is a website I discovered in college but had mostly forgotten about, and I was both pleased and surprised to learn recently that it is still going. Basically, people send in a phrase, and Sam, the creator of the site, creates a picture inspired by or based on that phrase. The relationship is usually more impressionistic or intuitive than literal, and the results are often surprisingly beautiful, despite the simplistic look of the artwork. This is a good example, and makes me want to put the site back into my regular rotation. 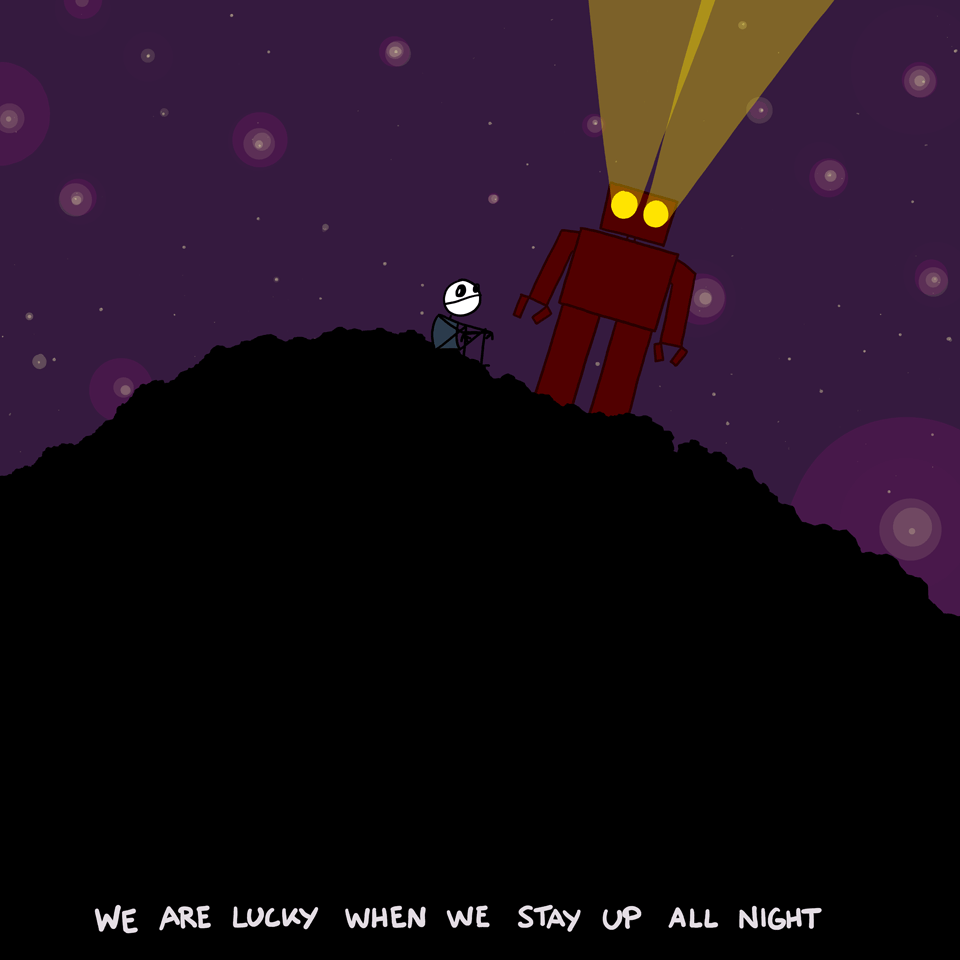