Two things to read and two sets of images to look at this week.

Article: “A Girl, A Shoe, A Prince: The Endlessly Evolving Cinderella” by Linda Holmes

“Cinderella” is not so much a story as pattern, or a set of patterns, which can be used to make stories out of some fairly dissimilar materials. Linda Holmes begins this piece with a discussion of a book that indexes 345 versions of the story, some of which are quite distant from the one most of us are most familiar with (and, as with many fairy tales, some of them are pretty grim— murder, cannibalism, incest, women giving birth to vegetables with no explanation, etc.). And, of course, the story changes in art to reflect the time in which its being told. Holmes looks at these changes, and at what doesn’t change, as a way both of reviewing the new live-action Disney version of the story and of thinking about why it is so enduring.

The idea that animates the classic Cinderella is that the prince would not be free to consider Cinderella a desirable mate if he first saw her as she is, but he can meet her under false pretenses and fall in love with her. And, most importantly, once achieved, that love will be durable enough to survive her reversion to her real identity. Getting him to literally recognize her — getting him to look at a woman in rags and realize she’s the woman he wants to marry — seems to function as sort of a stand-in for him proving that he can overlook her low status and choose her as a partner. Whether that’s more a fantasy of romantic love or a fantasy of economic security, power and rescue from a lifetime of washing floors may depend on who’s telling it and who’s hearing it and when.

As always, Holmes is smart, thoughtful, and funny in her analysis (if you don’t listen to the Pop Culture Happy Hour podcast, you really should), and she puts the new movie in context so that it appears as neither the worst nor the best possible telling of the story, but an entry into a long and complicated lineage. (As a side note, there’s also quite a bit of praise here for Ever After, an underrated movie).

This is an excerpt from Norris’s forthcoming book about being a copyeditor at the New Yorker, a magazine infamous both for the diligence of its editing and the eccentricity of its house style (a personal favorite: cöoperate rather than cooperate or co-operate). There’s some stuff about her own experience, including interactions with some of the magazine’s best known writers, as well as thoughts about the role of punctuation in general, and commas in particular. (Are they there to clarify meaning, or to make the written word mirror speech? Norris opts for the former). This is a job that I imagine sounds very, very appealing to a select group of people, and absolutely unbearable to everyone else; as someone who might be in the first camp, and who thinks the New Yorker is probably the best magazine in the world, the piece was a fascinating inside look as well as a chance to feel pleasurably indignant about the little dots and lines that we put in between letters.

Unsurprisingly, there are some really incredible shots here. Again, can’t share any of the actual images here, but number nine is my favorite. (And number five is pretty adorable).

These are some images from the Wellcome Image Awards, a competition in medical imaging sponsored by the Wellcome Trust. They range from pictures taking with electron microscopes to a 3D-printed model of part of the skeleton of a woman with Hodgkin’s Lymphoma. Some are actually quite beautiful, and all of them are interesting. This one, for instance, 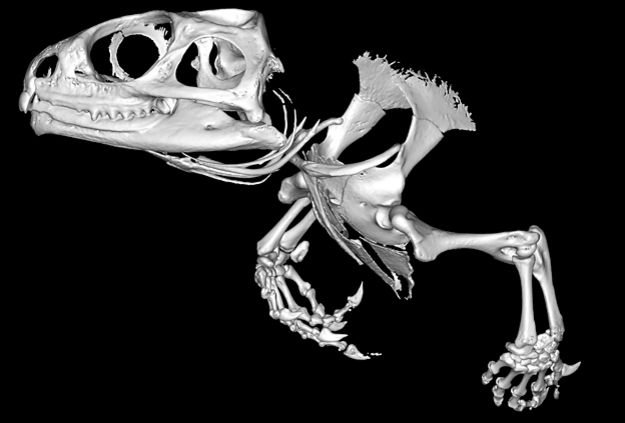 is part of the skeleton of a tuatara, a lizard in New Zealand whose two species are the only remaining representatives of a 200-million-year-old reptile group. Looking at the image prompted me to go look up more information about the animal, which is pretty much all I ask of something like this. Fun fact: the tuatara has one two of teeth in its lower jaw, which is overlapped on both sides by two rows of teeth in the upper. It is the only known living animal with that arrangement of teeth.