In “We Made Plastic. Now We’re Drowning in It”, Laura Parker’s recent cover story for National Geographic, the fundamental point— we make and throw away a lot of plastic, and this very bad— is not surprising; what she (and the photos, by Randy Olson) does most effectively is convey the scale.

Because plastic wasn’t invented until the late 19th century, and production really only took off around 1950, we have a mere 9.2 billion tons of the stuff to deal with. Of that, more than 6.9 billion tons have become waste. And of that waste, a staggering 6.3 billion tons never made it to a recycling bin…

I think most of us have come to take it for granted that plastic is a problem, but it’s interesting to think about how that impression has shifted over the course of the 20th century. As Parker explains (and a lot of this is also in a fascinating episode of theFlash Forward podcast), the first plastics were developed as replacements for other, scarce, organic materials, which were being over-exploited— things like ivory or certain hardwoods (celluloid), or natural lacquer (bakelite). They were, in other words, a more sustainable, environmentally-friendly option. And, in pure material terms, plastics are pretty remarkable.

Since helping the Allies win World War II—think of nylon parachutes or lightweight airplane parts—plastics have transformed all our lives as few other inventions have, mostly for the better. They’ve eased travel into space and revolutionized medicine. They lighten every car and jumbo jet today, saving fuel—and pollution. In the form of clingy, light-as-air wraps, they extend the life of fresh food. In airbags, incubators, helmets, or simply by delivering clean drinking water to poor people in those now demonized disposable bottles, plastics save lives daily.

The problem was that plastic was cheap enough to be disposable—”They were so cheap, we began to make things we never intended to keep,” as Parker puts it— and far too durable at the same time — once we make it, we are stuck with it. Or, maybe, it’s both too durable and not durable enough. Back in the 1990s, ecologists like Richard Thompson were actually puzzled about how little plastic seemed to be in the ocean.

World production has increased exponentially—from 2.3 million tons in 1950, it grew to 162 million in 1993 and to 448 million by 2015—but the amount of plastic drifting on the ocean and washing up on beaches, alarming as it was, didn’t seem to be rising as fast. “That begs the question: Where is it?” Thompson said. “We can’t establish harm to the environment unless we know where it is.”

In the years since his first beach cleanup, Thompson has helped provide the beginnings of an answer: The missing plastic is getting broken into pieces so small they’re hard to see. In a 2004 paper, Thompson coined the term “microplastics” for these small bits, predicting—accurately, as it turned out—that they had “potential for large-scale accumulation” in the ocean.

Contrary to popular belief, the “Great Pacific Garbage Patch” is less a coherent patch than a kind of soup of tiny plastic microparticles, the result of larger objects breaking down into extremely small pieces and getting pulled together by current patterns. These little bits are still plastic, though, and are possibly more dangerous because of their small size. Fish and other marine life mistake tiny bits of plastic for food as they become “biofouled”— covered with a coating of algae, making them smell like the fish’s normal diet. Sometimes those pieces stay in the animals’ bodies; Thompson once examined 504 fist from 10 species caught off the coast of Plymouth, and found microplastics in more than a third. Other times, the bits are returned to the ocean. Thompson and two students did lab tests in 2017 in which they saw

amphipods of the species Orchestia gammarellus—tiny shrimplike crustaceans that are common in European coastal waters—devour pieces of plastic bags and determined they could shred a single bag into 1.75 million microscopic fragments. The little creatures chewed through plastic especially fast, Thompson’s team found, when it was coated with the microbial slime that is their normal food. They spat out or eventually excreted the plastic bits.

Plastic will be with us for a long time, but maybe not in the shape we expect.

Plastic’s fragility is a problem in other ways as well. Both “Even Plastic Art Decays, But Museum Curators Are on the Case”, by Eleanor Cummins, and “No, Your Furniture Shouldn’t Drip Or Burst”, by Eve M. Kahn, describe the problems for museums conservators presented by plastic works of art (both via BLDGBLOG). Museum collections now have many works of art made of plastic, especially from the 1960s and 70s, when Pop Art came to prominence, and many of these are aging very badly: changing color, becoming brittle, leaking globs of stinky goo, or off-gassing acids that can damage other objects. Among other problems, museums don’t often know precisely what plastic objects are made of, and different types of plastic present different problems; figuring out the precise makeup of an object requires specialized (and expensive) equipment. So the problem here is not that plastic is too durable, it’s that plastic is less durable than materials like wood or metal— at least as long as there is much better understanding of how to care for those materials.

(Reading this, I also though of Ben Lerner’s great piece “The Custodians” about art conservators’ struggle with things like 3D-printed artworks that aren’t designed to last, and more generally the difficulty of drawing the line between restoration and re-creation.)

A couple of weeks ago, at Chicago’s Museum of Contemporary Photography, I saw a few images from photographer Fabrice Monteiro’s series“The Prophecy”. 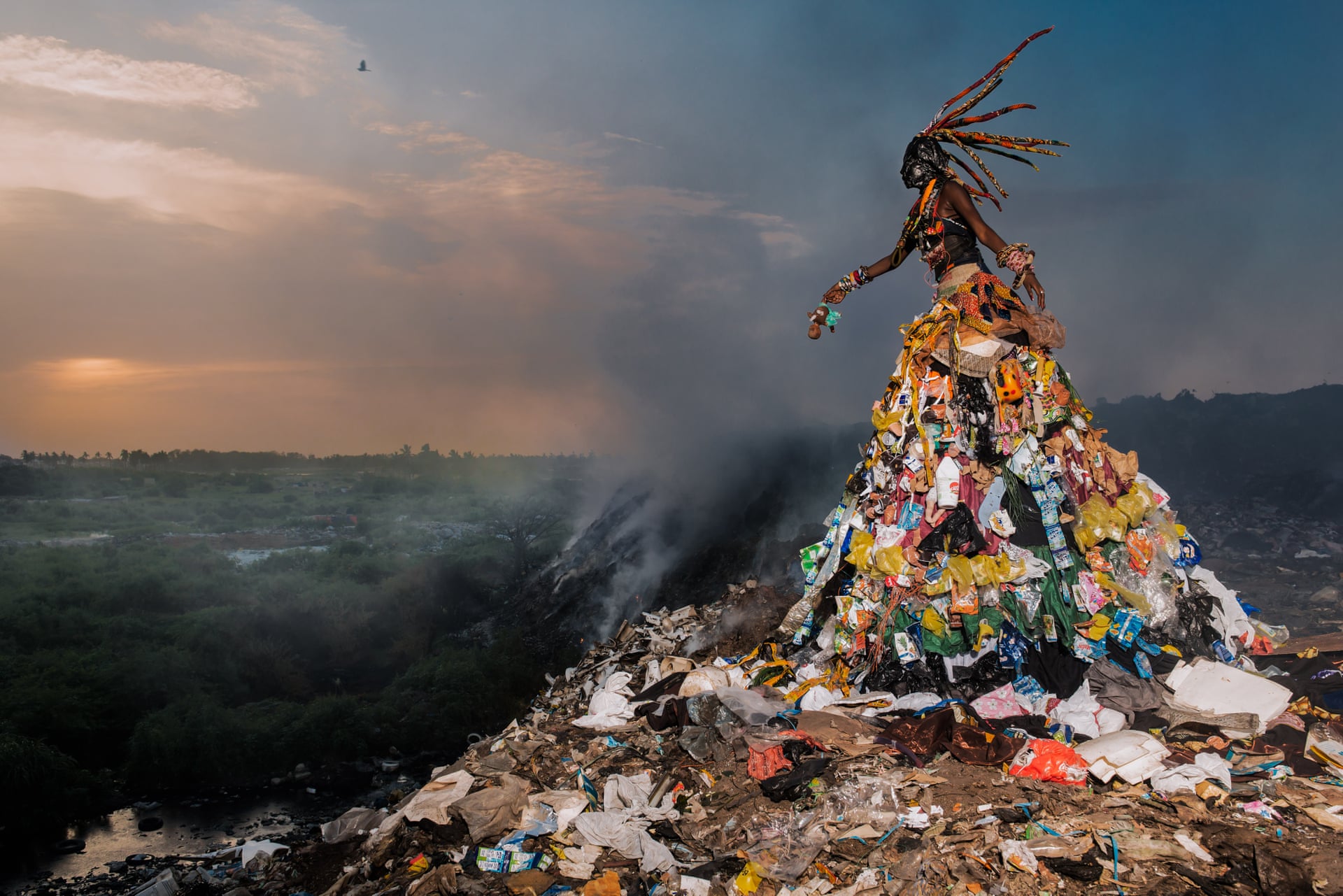 The images depict eerie, alien creatures in landscapes befouled by e-waste, oil spills, and plastic; the figures are obviously carefully and elaborately designed, but the backdrops, as Monteiro points out, are entirely real. Each image depicts one of nine ecological “plagues” infecting Senegal (and one in Australia); the figures represent Jinns, sent to warn humans of the dangers of our actions. (There’s also a short—18 min.— documentary about the making of the photos.)

The places in Monteiro’s photos are completely transformed by human activity; there’s a sense in which the plastic and trash are now the landscape, rather than a layer on top of it. Having recently re-watched Manufactured Landscapes, Jennifer Baichwal’s film about photographer Edward Burtynsky, I couldn’t help but think of these as also, in a way, manufactured, but in a kind of haphazard, accidental way. Maybe “accretive” would be a better word—”accretive landscapes,” formed as by-products of the global mass production of goods to cheap to hold on to, and too hard to get rid of properly— both disposable and, literally, indispensable.

At some point, the quantitative change in the amount of plastic or other waste becomes a qualitative one. This is, I guess, the idea behind the concept of the “Athropocene,” an era in which human action begins to reshape the environment in fundamental ways. (Not coincidentally, this is also the title of Burtynsky’s next project.) At some point, it makes sense to stop seeing human action as simply affecting the environment, and start seeing it as, in a more radical sense, transformative— we are making the world something different from what it was. Plastic is no longer simply “in” the environment; our environment is made, in part, of plastic, just as it is made of minerals and organic matter. “On Hawaii’s Big Island,” Parker says, “on a beach that seemingly should have been pristine—no paved road leads to it—I walked ankle-deep through microplastics. They crunched like Rice Krispies under my feet…On some beaches on the Big Island of Hawaii, as much as 15 percent of the sand is actually grains of microplastic.”

Also featured in the same issue of National Geographic is some work by the photographer Mandy Barker, who collects and arranges plastic waste found, mostly in and around the world’s oceans.

Every piece of plastic in that picture was found inside the stomach of an albatross chick (yes— one baby bird). With some of her images, I felt a bit wary of the possibility of aestheticizing the problem— in other words, they are sometimes too beautiful. But they do successfully recontextualize all of these bits and pieces. There are only a couple of images in the National Geographic article, but Barker has lots more, in several different series, on her website.

(Fabrice Monteiro’s photos, by the way, are at the MOCP as part of the exhibition In Their Own Form, which is great and definitely worth checking out if you are anywhere in the Chicago area. More of his work can be found on his website).