Like, I think, most of us, I’ve found the news from the last several weeks…troubling. I thought writing about some things I’ve enjoyed recently might lighten my mood a bit. I don’t have a real theme this time around; there’s no particular connection among these things, so this is more like the recommendations posts as I used to do them. Just some things I liked, or that made me think, recently.

First, Tim Hecker has a new album out, and, though it’s early days yet, this one might be my favorite. He’s working with several musicians playing classical Japanese instruments; that makes the timbral palette of this album really different from his previous albums, although it remains recognizably his work.

I’ve never been quite sure what to make of Cindy Sherman’s work. She’s certainly found— or, really, created— her own space, and done it through consistency and singularity of vision. At the same time, sometimes her photos read as stunts to me, as though what we are seeing is more a demonstration of her willingness and ability to transform her appearance than a serious attempt to create images that are interesting in themselves. (I don’t know that I think that photographs have to stand on their own, divorced from context, either, but that’s another, larger question). I also have a powerful allergy to anything that strikes me as intended to shock for the sake of shocking, and Sherman sometimes seems to me to walk very close to that line.

I’m not sure that this look at her Instagram feed is going to change how I feel about any of that, but, once again, you can’t say she isn’t doing her own thing there. Once again taking her own image, her own face, as a starting point, Sherman employs some common selfie tweaks— digital make-up, filters— and cranks them up to 11, with results that are…well, here: 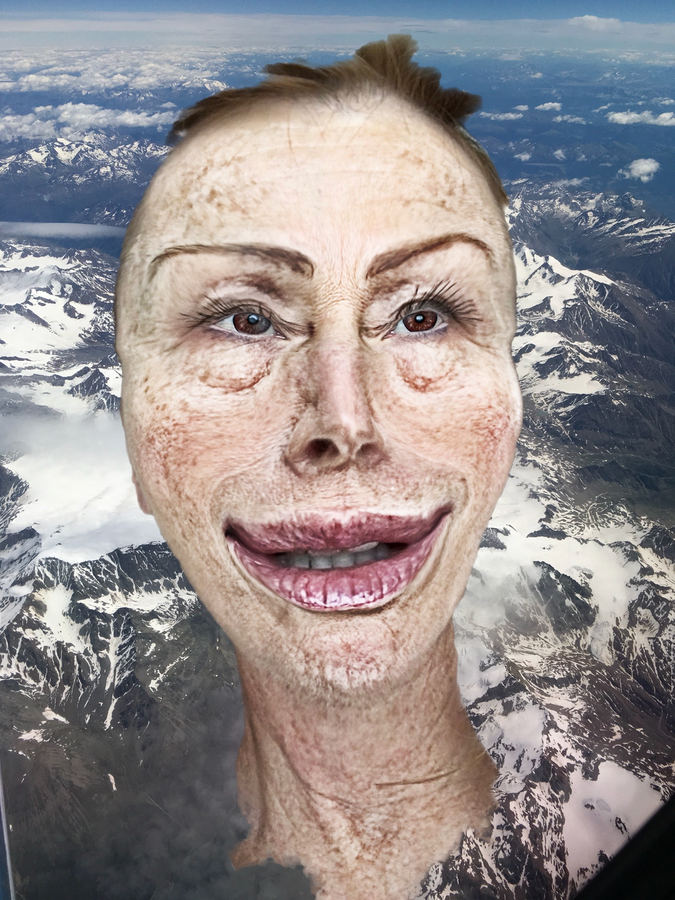 So, is that just ridiculous? Does it make some kind of comment on the way we manage our image online? Does it need to? I don’t know, and I can’t say this piece clarifies anything. But, again, I’m not sure that’s the right metric here.

Alright, maybe there is something of a theme here. “How Auto-Tune Revolutionized the Sound of Popular Music”, by Simon Reynolds, is also about ideas of authenticity and performance. The original function of Auto-Tune was simply to correct a singer’s pitch, and it was intended to do so unobtrusively, so that the result would still sound natural. That, of course, invites critics to say that singers using Auto-Tune are using it to make them sound more talented than they are. But then the producers of Cher’s “Believe” discovered the weird, robotic effects produced when you crank up the speed of the pitch correction, and soon all kinds of people in all kinds of genres were warping vocals in ways that don’t sound even a little bit natural. And if the intent is to produce something where the degree to which it has been altered is right on the surface, then in what sense is the product less of a “real” thing? Reynolds points out that

Some engineers will record the vocal so that there is a “raw” version to be fixed up later, but—increasingly in rap—there is no uncooked original to work from. The true voice, the definitive performance, is Auto-Tuned right from the start.

It seems revealing to me that I have trouble writing about this without using words like “altered” to described the output of Auto-Tune. Obviously, that’s not what anybody would sound like singing in a room with no equipment, but, as Reynolds also suggests, any recorded singing you’ve ever heard has involved putting somebody’s voice through a range of mechanical and electronic apparatus, all of which inevitably have some kind of effect on how that voice sounds. If you disdain the “cold” or “brittle” sound of digital recording but prize the crackle and hiss of old vinyl, that’s a matter of personal taste, not a different level of “authenticity.” Even the basic techniques of singing, Reynolds says, can themselves be considered technologies, developed over centuries, for deliberately altering the sound of the human voice.

Reynolds is far more impressed with trap than I am (especially Future), and his suggested explanation for the popularity of Auto-Tune— we live in a digitally mediated world, for which the sound of Auto-Tune is a natural fit— seems both a little glib and to beg the question. But the piece does express an interesting tension between the desire to access or express the “real,” unmediated core truth of a person and the technologies through which, increasingly, we present ourselves to the world. Both Auto-Tune and Sherman’s selfies on Instagram not only foreground the layers of mediation those technologies create, they implicitly (or maybe not even implicitly) question both the possibility and the value of making those layers transparent.

(I guess I could also add that Hecker’s work increasingly involves the digital manipulation of “real,” live performances by various instrumentalists, and so maybe also fits in somewhere in this continuum.)

It’s a bit older, but writing this I also thought of “Post-Authenticity and the Ironic Truths of Meme Culture”, by Jay Owens. There’s a lot in the piece, including a discussion of “fake news” and how we should deal with the disappearance of a common factual baseline from which to have political discussions. The main thing I’m thinking of, though, is her observation that for a lot of young people, “authenticity” mainly denotes a particular set of aesthetic trends and tastes (reclaimed wood, beards, latte art, artisanal everything) which are increasingly out of fashion, see as simply one more commodified lifestyle option. Instead, younger people tend to communicate serious feelings and concerns through layers of irony, often contained with memes or other digital, internet-native forms of expression, which are self-evidently altered and reproduced and repurposed— which cannot possibly perceived as having been created to express the true self of the person posting them.

…the external world and its influences is inescapable and not straightforward to slough off, and nature and society shape us just as much as our own choices. And so authenticity must always be negotiated in complex interdependency with its opposite — that is, you were never really authentic in the first place.
That tension is what meme culture is negotiating: these unexpected, witty truths emerging through the most inauthentic, borrowed, or stolen stock content possible.

Because people still want to tell the truth about their lives and the world — absolutely nothing has changed there.

What is changing, I argue, are the cultural formats people are using for discussion — the carrier waves for this signal. This is where “authenticity” isn’t a useful claim any more, having been wholly co-opted and commodified into its opposite. Culture and the way we communicate — shaped by media affordances — have become more complex, ironic, and multi-layered than that.

What’s confusing here is that it’s not really authenticity as in honesty, integrity, or genuineness that has fallen out of favor, it’s a particular set of signifiers of those qualities, which— largely because of their deployment in marketing consumer goods— no longer signal what they once did. Which is a little like what’s happened with Auto-Tune, maybe? What seems, superficially, like the least authentic, most processed sound becomes a new means of authentic expression— authentic in part because it wears its artificiality on its sleeve. It’s fake, but it’s honest about it’s fakery; with questions about what’s real and what isn’t set aside, we as listeners can concentrate on the choices artists make about how to use the technology, and those choices themselves may be more expressive, even more revealing, than a more “natural” or “authentic” piece of work where the traces of those choices are hidden from view.